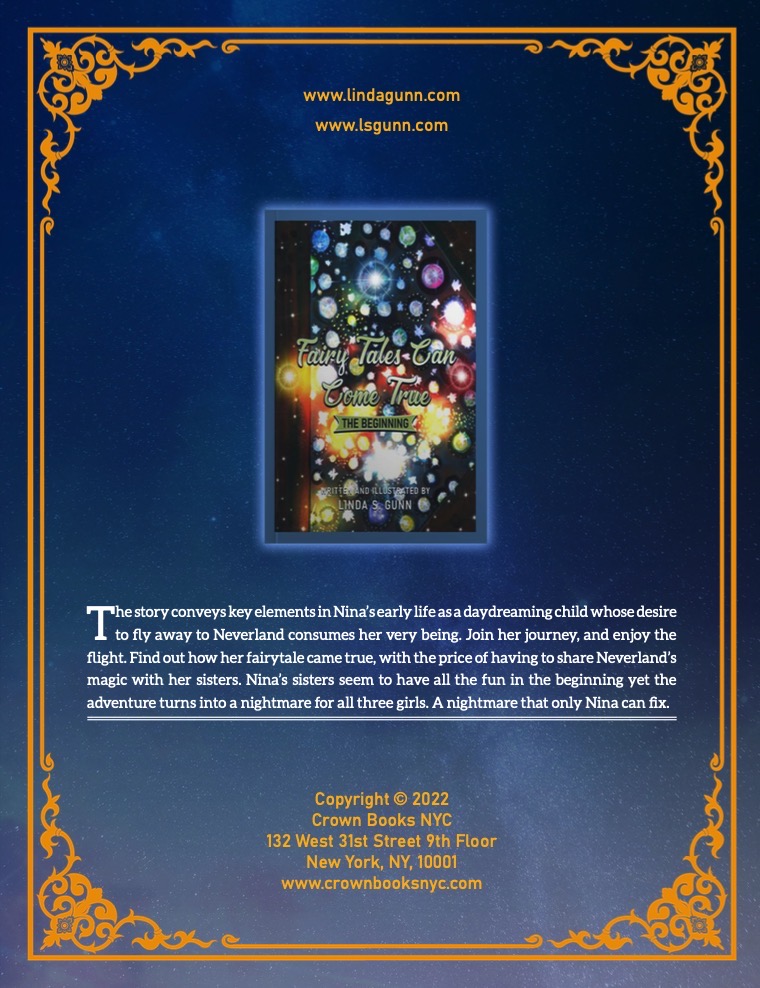 “The story conveys key elements of Nina's early life as a daydreaming child whose desire to fly away to Neverland consumes her very being. Join her journey, and enjoy the flight. Find out how her fairytale came true, with the price of having to share Neverland's magic with her sisters. Nina's sisters seem to have all the fun in the beginning yet the adventure turns into a nightmare for all three girls. A nightmare that only Nina can fix.”

Inside Linda Gunn’s book "FTCCT: The Beginning" is a child’s rich imagination of her own world of fairy tales. It takes the readers back to that same age when they’ve got the same creative mind. Such innocence makes anyone wish they could protect their childhood. It takes us back to that nostalgic feeling we miss, which asks, "Where did that part of myself go?"

The story is mainly from Nina’s, the main character's, point of view. It takes place during the childhood years, when their eldest sister, Marie, is already entering adolescence, while their youngest sister, unaware of the change, remains the annoying but cute little sister. Nina, on the other hand, cannot seem to understand why their eldest sister needs to change, since they used to be three sisters playing together, sharing the same imagination. Nina always has her mind giving out reasons and scenarios for everything that happens to her and her family. Usually, she enters another world whenever she’s alone and her dream to be Peter Pan’s "next Wendy" comes alive.

Linda S. Gunn is a recognized fine artist. It won’t be a surprise that her book is supported by enticing illustrations. Young readers would surely be enthralled.

In the book, Nina says that she knows in her heart that sometimes the imagination can be true. Many will agree. Even Walt Disney once said, "Whatever your mind can conceive, your body can achieve." The law of attraction also states that one’s thoughts determine one’s reality. This optimism is just one of many things a reader can potentially take away from the story.

I can imagine every part of the story. The place, their actions and emotions are explicit. Every conversation is real. Nina’s point of view takes you back to when you were at her age. I can totally see myself in her story. Talking to any animal, investigating things, looking for hidden treasures, singing made-up songs, and even that part wherein Nina’s curiosity gets the best of her. Anyone who has watched the Peter Pan movie would realize that Nina seems to be becoming more like Wendy. How she tells her sister stories just like Wendy, and when she meets the little boy who sounds like Peter Pan.

Childhood memories. "FTCCT: The Beginning" keeps them alive. When Linda said, "I want to share these events from my childhood with others who secretly believe in their happiest dreams, because there are times in life when the imagined really does become reality." She’s saying that this is for all of you who have ambitions. She wants to inspire all those youthful aspirations to go bigger. Go forth and pursue your dreams!

Interesting. Inspirational Authentic. Linda Gunn’s book "FTCCT: The Beginning" is 5 stars out of 5 for me. You should read it as well! 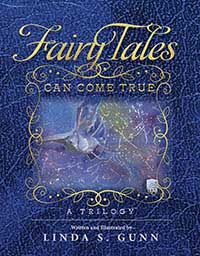 As a child I was given multiple books to read by my classic, literature loving mother. The first thing I did when handed a book was to flip through it to look at the illustrations. If the pictures intrigued me I read the book. It used to be that all novels were illustrated unlike today except for the book cover art. My book, FTCCT is my memory of my childhood fantasy visions brought to life through my illustrations. I encourage readers of all ages to flip through my book to look at the pictures before reading the story.

Fairy Tales Can Come True, A Trilogy tells the story of three California-based girls, Marie, Nina, and Mo. The likes of the three stooges, and sometimes three musketeers, these young girls are sisters forever. The book follows Nina, the middle child, who often escapes to her make-believe world to relax and sometimes to cope with her family members.

Linda S. Gunn, aka Nina, is an independent fine art professional. Her paintings have been published in books and magazines and exhibited worldwide. One of her popular pieces, The Peter Pan Statue, hangs in the Peter Pan Wing of Great Ormond Street Hospital, London.

The book one of the trilogy, Fairy Tales Can Come True was published and has received good reviews from its readers.

Full of imagination, creativity, and fun, Nina embraces both "what is" and "what might be" with undoubting enthusiasm. Fairy Tales Can Come True is Nina's story. It reflects her humor, shows her frustrations with the limitations of reality, and shares the trials and tribulations of growing up as part of a widely diverse bevy of females in the 1950s”,says a spokesperson for the book Fairy Tales Can Come True.

“I read this book to my students. Many of them could relate to the family squabbles and adventures of Nina and Mo. They were mesmerized by the magical possibilities of fairies, and they would cheer in support of Nina's struggles. At the end of the day when our time for reading had come to an end, they would beg me not to stop. They are anxiously waiting for the second book in the trilogy”, says an impressed reader.

With her love for arts and illustrations, Linda has come up with spreading her message through her fully illustrated book; Fairy Tales Can Come, A Trilogy. She says, "Dreams that are never imagined can never come true. My message is that personal sacrifice for the family is sometimes the only key to happiness." 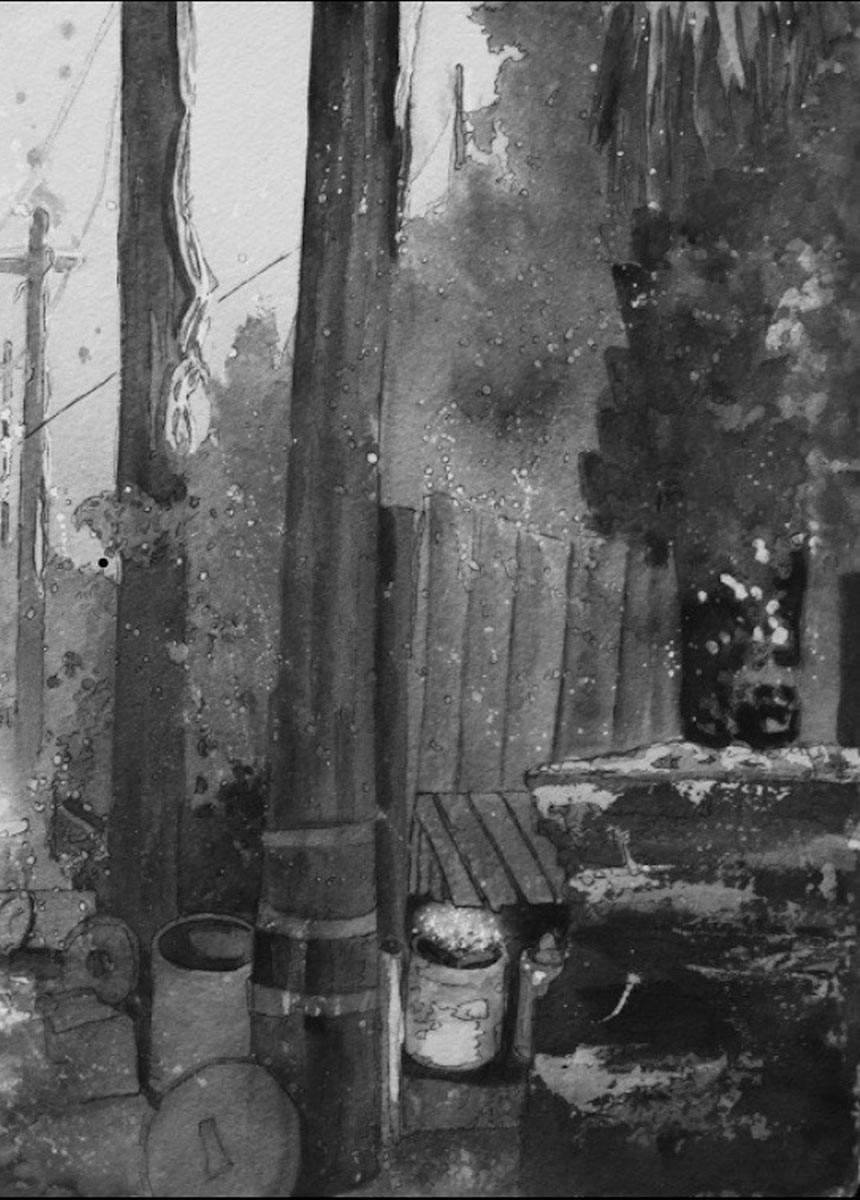 I have to look inside this beautiful book! The cover is thick, and it's hard to open. Written on the first page in very small, fancy gold print are the words "You the reader, hath been selected to learn the truth within these pages." When I turn the page, I see the title of the book- The Truth About Fairies, and right under the title is "Fairies are magical beings known to visit children with imagination who live in the real world." Oh, my goodness! They are real! I knew it! 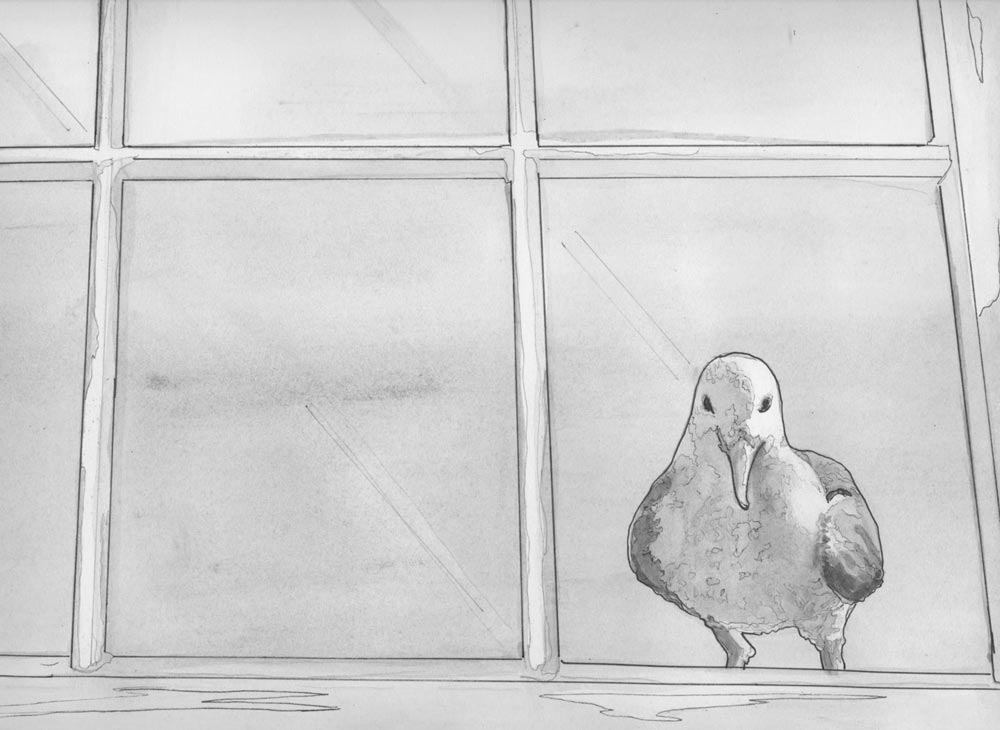 Seagully in the office window...

"Look at me, I said! That book you have doesn't look like it's something you ought to be reading. I'll take that, thank you." She leans over her desk and takes the book about fairies from my hands and puts it on her desk. I notice that the book is no longer sparkling. It looks old and worn out now. How dare she take my book! How would she know if it's unsuitable for me? She wasn't chosen to read it-I was!

Miss Perrett's bright, red lips move over her teeth. There is lipstick on her front tooth. She looks like someone evil as she reminds me of all my visits to her office in the past two years. I study every detail of her face. The way her long black hair turns under at her shoulders and her mean eyes make me think of Captain Hook, the pirate who fought Peter Pan in Neverland. "Miss Pirate", I say under my breath. 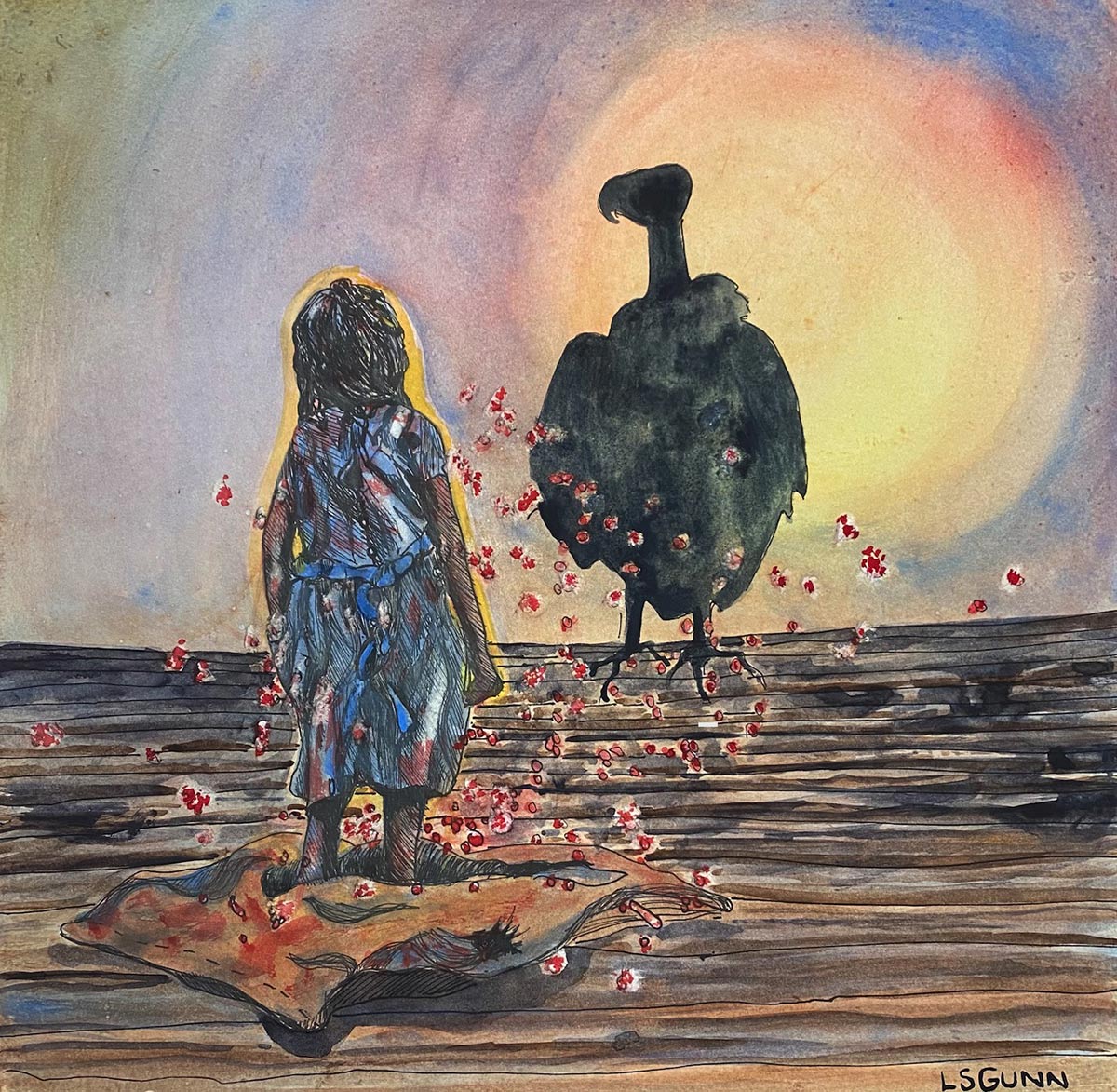 Nina and her sisters in Neverland...

Nina is put in a gunny sack then dropped onto the deck of a ship. A knife just misses my face as it cuts through my burlap sack. Finally, fresh air and relief! The bright sun blinds me as I rise from the sack. The men standing around me are strangely quiet for several seconds before yelling out in unison, "RED FAIRY". In a panic, they run away, leaving me face to face with an enormous vulture that has a bloody gash where it's right eye should be. The bird pecks at and pulls my hair and blue nightgown. I turn my face away to protect my eyes. 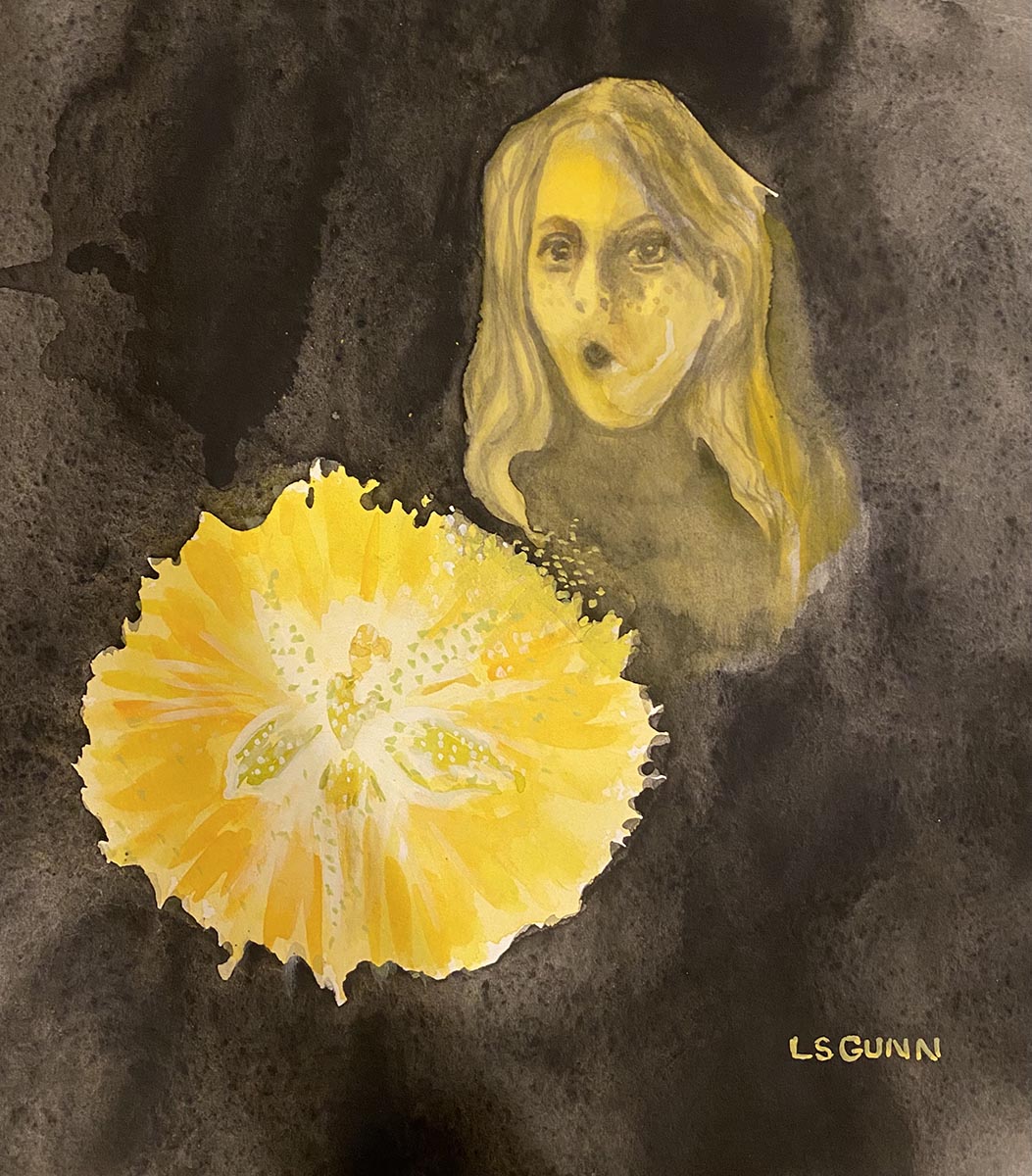 Mo didn't notice the sparkly substance on the floor or hear the teeny tiny tinkling noise. It was the sudden bright ball of warm light in her face that brought her to her feet. 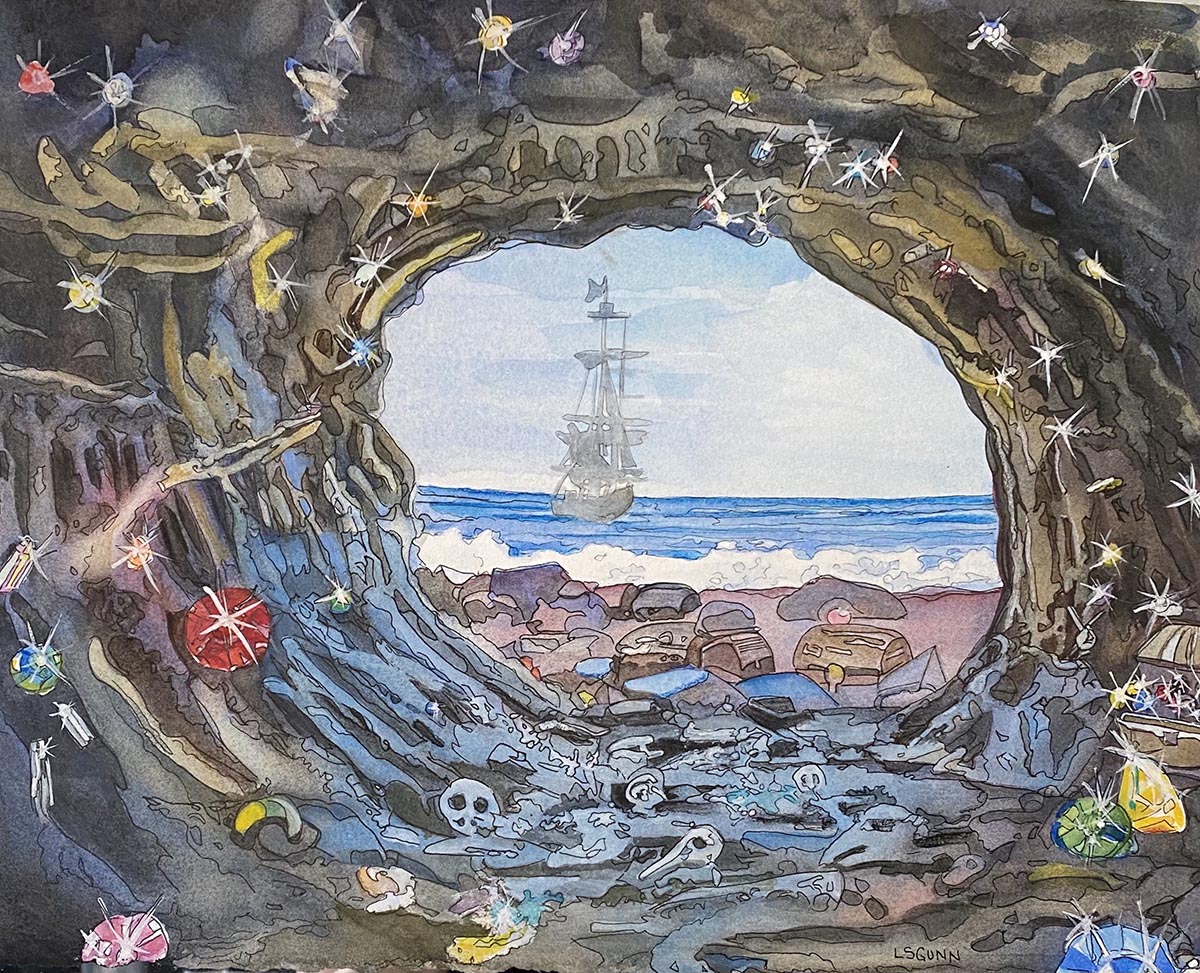 Squeaky directs my attention to a corner that is littered with gold coins, colorful jewels and strands of pearls. There are several pirate chests. Some have been opened, but most are still locked. I wish I could see what's inside all of them, but the smell is so overpowering that I have to get out of this cave for a breath of fresh air. 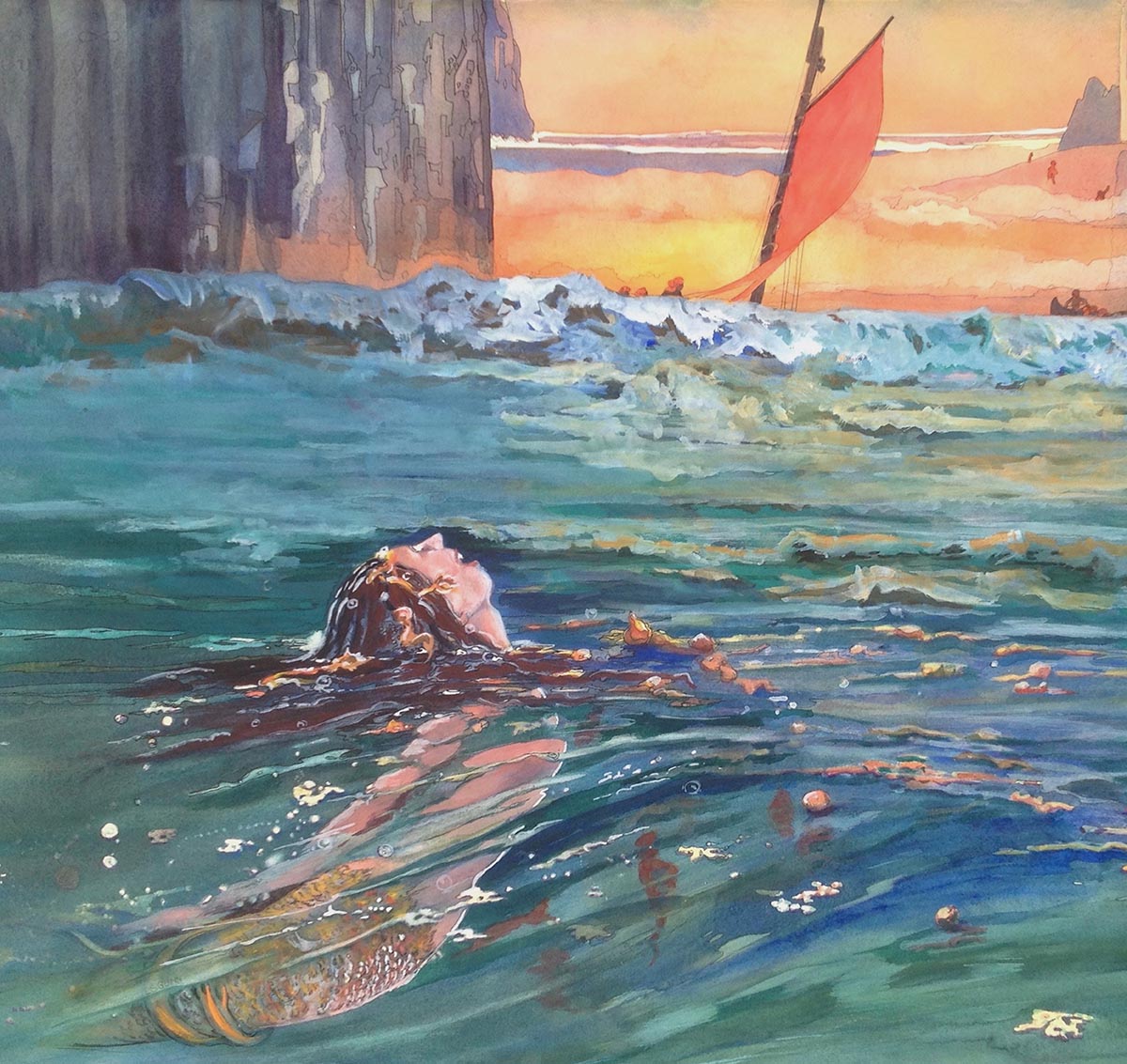 "What's happening?" shrieks Marie to her crew of Pirates. Their longboat is roughly tossed up, down, and sideways on the monstrous waves. Bolts of lightning hit the water around them and the wind howls so loudly that she can no longer hear the loud sirens of the mermaids surrounding the boat.